This past December we took our first international trip since the pandemic started. We have a condo in Mazatlan (Mexico) and typically go there every Christmas season. Arranging the flights was not easy; we engaged Andrea Cook and she worked some miracles for us. We finally got our reservations completed, but they were changed many times (I recall at least five changes, and they were major changes, not just minor time shifts, etc.). Previously we were able to go from David to Mazatlan in the same day. Not this year. Copa was the DAV/PTY/MEX connections, and AeroMexico was from MEX to MZT. Two days travel outbound and three days travel inbound.

The outbound trip involved an overnight at PTY (we stayed at the Crowne Plaza Hotel, which was substantially cheaper than the Riande), then the second day was from PTY to MEX, and onward to MZT. We finally got to our condo about 7:00PM. Two days of hassles and stress, but we got there safe and sound, although exhausted. Other than wearing masks (required) and face shields (not required, but something we do), the flights were nice and uneventful, but totally without food or drink service. We were given a bottle of water upon entering all of the flights. Whoopee! There were no Covid-19 tests involved in getting to Mazatlan.

Sidebar comment here. A couple of days before we started our return flights we opted to get Covid-19 tests in Mazatlan. That was not easy because they all require appointments at least two days in advance. We didn't know that, but by encouraging (tipping) our driver he was able to call a relative who had a friend, who, well you know that story. We did get unscheduled testing completed. Cost was about $50.00 USD each (not including the $20 tip), and results (negativo!) were returned via email about four hours later.

The return flights were not easy and quite stressful. Upon checking in at MZT for a domestic flight to MEX we were stunned to be asked for a copy of our Covid-19 tests. We had them, but questioned why. Mexico does not require Covid-19 tests for their airline passengers. Further this was a domestic only flight, as we were to overnight in Mexico City before heading south. We have permanent residency status in Mexico, so as a legal resident we should have been treated like any Mexican citizen, and they were not being asked for their tests. Only we were asked. What was going on? The agent, Guadalupe Hernandez, was incredibly friendly and helpful. We showed her our test results from the email on my iPad, but she needed them in writing. So she gave us her email address and we emailed the two reports to her. That was scary. Eventually we cleared the check-in process, which took almost an hour, and then went to the boarding gate to wait for our flight. At the boarding gate we saw Guadalupe again (she is multi-tasked). I asked her about the need to show our test results while no one else was being asked, and she responded with two comments. First, the airline knew we were enroute to Panama, and Panama requires Covid-19 testing for entrance. (We presume that we were the only passengers at Mazatlan for that flight who ultimately were going to Panama; safe to bet on that presumption.) Her second comment was that we would not have been denied boarding for the flight to MEX, but having the test "completed their documentation" (her terminology) for our reservation details.

We get to Mexico City, and overnight. The next flight was extremely early and we were told we needed to be at Terminal 2 at least three hours in advance. So we get up at 4:00AM for a 4:30AM scheduled taxi from the hotel to Terminal 2 (the Hilton Hotel does not have a shuttle van). No problem checking in for the Copa flight to PTY, and we never were asked for a Covid-19 test.

Arrival at PTY was at the furthermost gate at the end of that wing of the airport. Almost all of the passengers on that flight were through passengers going further south into South America. Only about ten passengers deplaned in PTY. The very first question we were asked (at the ramp door, not even one foot into the terminal itself) was whether we had our Covid-19 test results. We told the agent we did, but they were rejected as too old (not within the 48 hour window from arrival at PTY). We were shuttled to a Covid-19 test station in that wing of the airport.

We were fortunate because there was no queue at the testing station. A few minutes later there was a rather large queue. We showed our cedula's and provided address and contact information to the first agent, and paid $50 each; credit cards accepted. We then immediately were shuttled to the back area for the tests. There were two holes in the transparent shield between us and the medical technicians. The paperwork went through one of the holes, and then she had to see our cedulas. She studied the cedulas and our faces quite intently. The test was described as a PCR (probe up the nose version) and was completed within a minute. We were told it would take 30 minutes for the test results and to wait outside in the chairs. The waiting area had been set up with many chairs, and right next to toilet facilities. At exactly 29 minutes after completing the tests, an agent came into the passageway and called our names. Both tests were (again) negative.

Here are a couple of pictures taken at the Covid-19 testing station in that wing of Tocumen Airport. You can't see the chairs in the waiting area, but they are there. 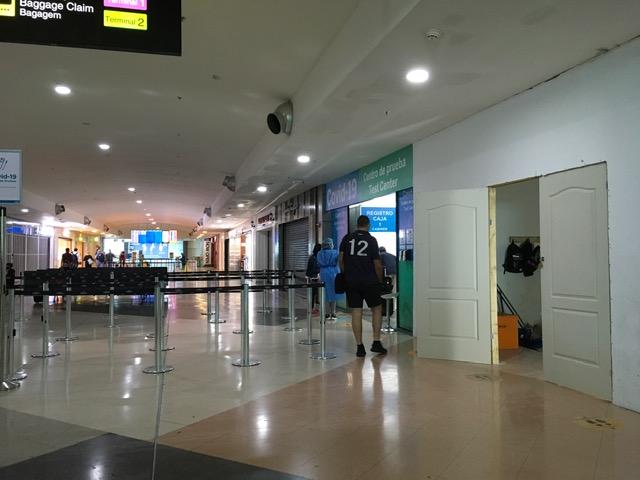 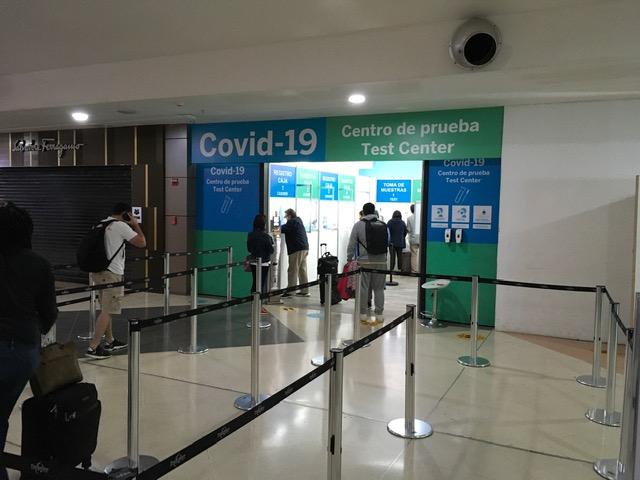 Onward we go to passport control. Only one passport control station was operating. The first thing upon entering that area was to show our Covid-19 test results. That required showing not only the Covid-19 test report, but also holding up our cedulas so that they could verify that the report applied to the person standing in front of them. Again, a lot of attention to identity details. There were several police officers in the area, presumably to keep things under control and moving as smoothly as possible.

We then go to the passport control station. That agent moved slower than cold molasses in the dead of winter at the North Pole. I estimate at least ten minutes for the two of us to finish that task. There was a LOT of typing on the keyboard, much more than previously experienced. Maybe she was just a bad typist. Who knows.

We overnight again at the Crowne Plaza Hotel. The third day of travel again starts at 4:00AM, with a 4:45AM scheduled taxi (no free hotel shuttle van at that hour). The third flight was uneventful.

Deplaning on the Copa flights is done one row at a time, starting at row 1. The explanation is that the procedure is done for physical distancing reasons. Fortunately for us we were in the front sections on those flights. The passengers in the rear probably had at least a ten to fifteen minute wait to deplane.

And finally, upon exiting the David terminal was an experience with lots of people outside crowded around the one exit door that was in use. You have to keep pushing your way through to get out of the terminal. But we finally made it home. A successful but not easy trip.