Yesterday, July 31, Anouk (our 2 year old rescue Husky) was scheduled for the Amigos de Animales spay/neuter clinic. We arrived an hour and a half earlier than the appointed start time and discovered other pet owners with their animals already waiting in the parking lot. Anouk was excited. A novel car ride, no food or water since last evening, and other dogs barking caused her to jump around inside the vehicle. Not an easy task trying to calm her. Finally she takes a nap.

We were fortunate to be assigned a low number for the surgery line. Bud waited in the registration area and I stayed with Anouk in the car. Some drivers came speeding into the lot and parked close to the building to unload their crates containing dogs and cats. The scene that caught my attention and touched my heart was the Indigenous family that walked to the clinic with the little boy carrying his special pet dog.

At the appointed hour, volunteers put equipment (e.g., cages, etc.) in place, opened the doors, and the program began. First step was a short registration procedure, which Bud took care of while I sat with Anouk in the car. Lots of people, noisy animals, and all kinds of activity -- but well organized. I was impressed how helpful and friendly all volunteers and team members were. Mr. Huff (don't know his first name) explained the routine.

We watched and accompanied Anouk as she started through the process. That the helpers knew their role and the routine of animals moving along the surgery line was obvious. A well organized and trained staff of people were at their assigned stations, starting with Dra Chely administrating the anesthesia, others shaving the animal before surgery, tattooing the letter "S" in the animal's ear, hand carrying the dog or cat to the appropriate surgery table for the operation, and then making certain each patient received an injection of vitamins and antibiotics before receiving individual monitoring and rubbing on the "wake-up" blankets.

Dra "Ingrid" (don't know her full name) was the vet that operated on Anouk. Sigrid was the attendant who took good care of Anouk at the recovery station, petting her, checking vital signs, etc., until Anouk was awake enough to go home. A "trolley" carried our 40 plus pound dog to our vehicle and placed her (half asleep) in the back of the SUV for the trip home.

Anouk doesn't like it, but after getting her home we placed a bonnet (parabolic collar) around her neck to keep her from scratching or licking her wound. We had already purchased such a collar at Melo based on recommendations of some friends. We hope this helps in the healing process. Now the job is trying to keep her quiet (no cat chasing) for the next several days!

Here are some pictures that Bud took with his iPhone during our time at the Clinic. 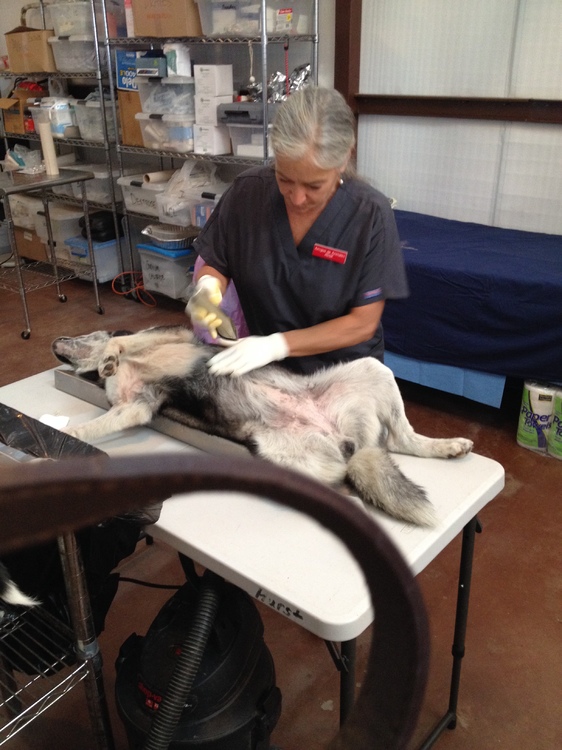 The shaving/preparation station. (That is Anouk, out like a light). 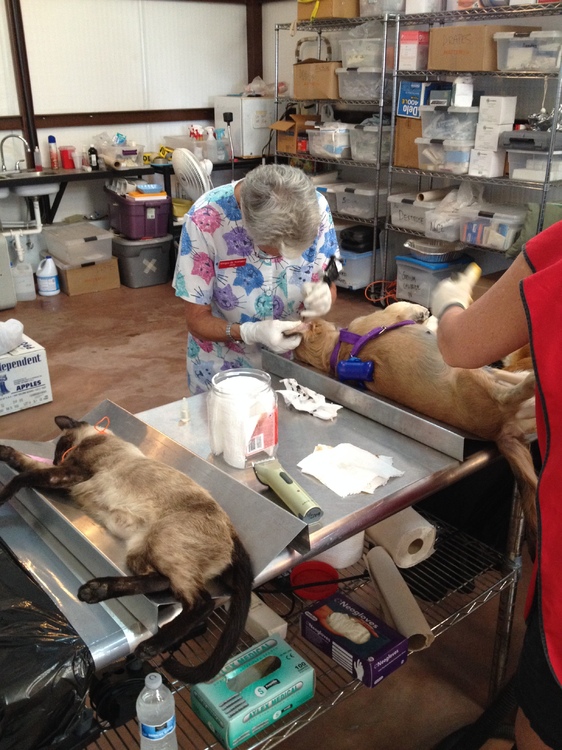 The tattoo station (that is not Anouk, but another pet, and another awaiting the procedure). 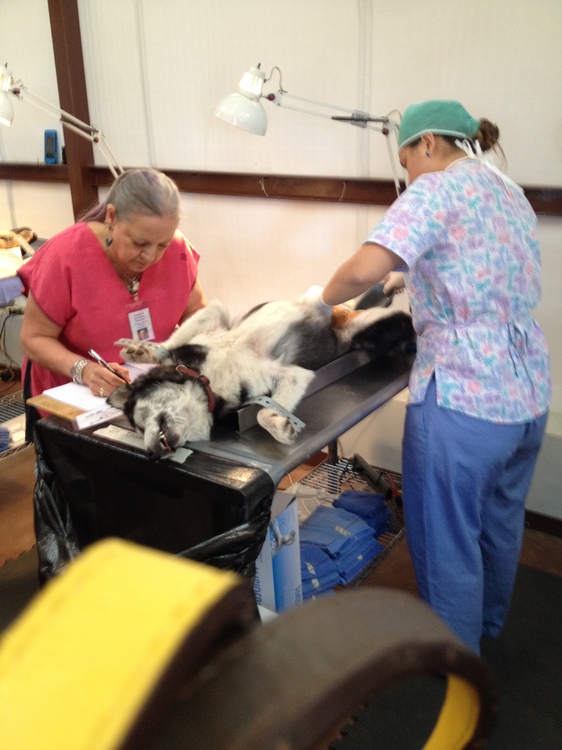 Anouk on the operating stand with Dra "Ingrid" and a helper. 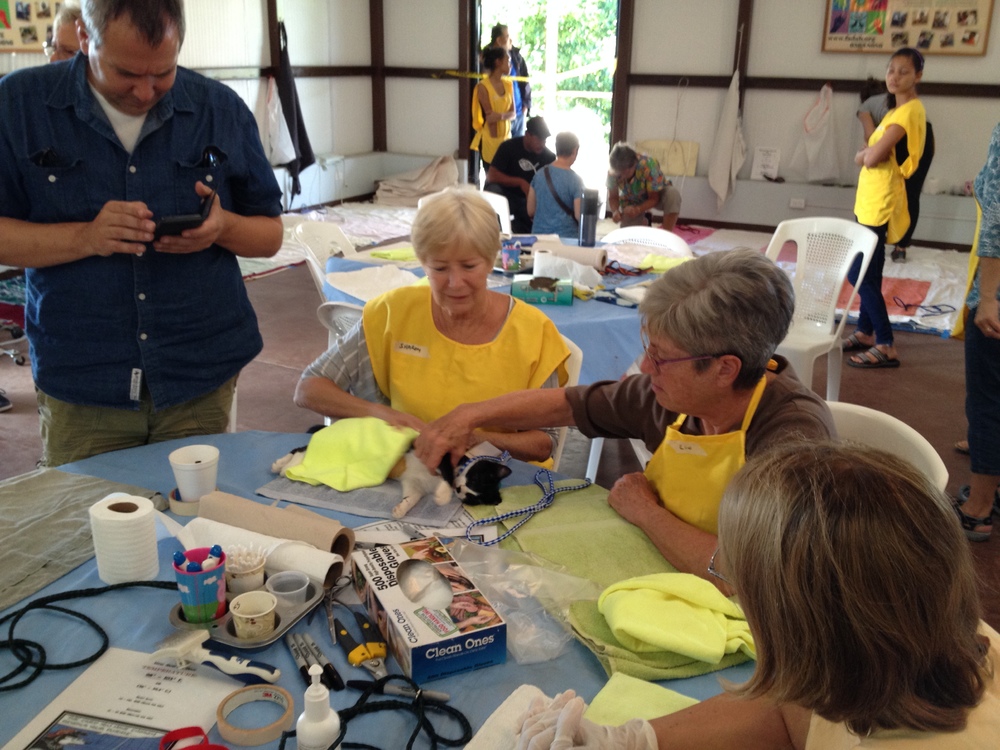 Some of the volunteers at the recovery station with a small kitten. 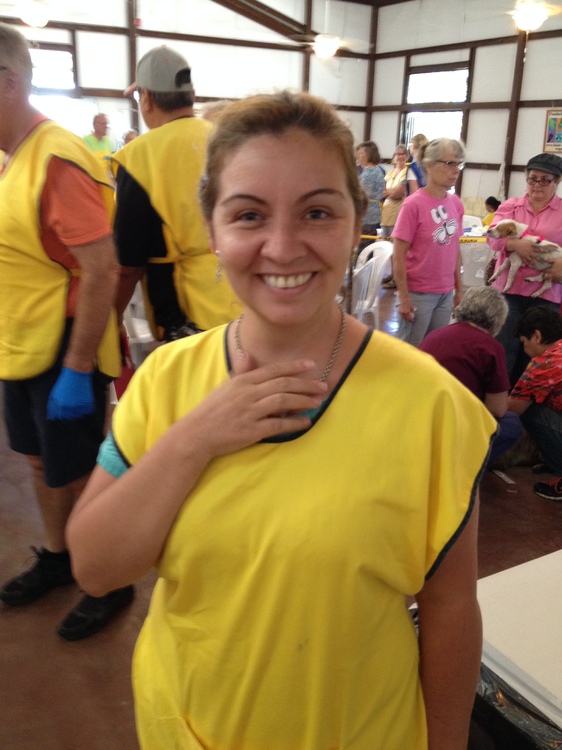 Magaly, part of Anouk's "rescue team". Magaly is super nice and so helpful. (Well, actually all the volunteers were wonderful!) Magaly is very special to us because she is one of the people who brought Anouk into our lives. 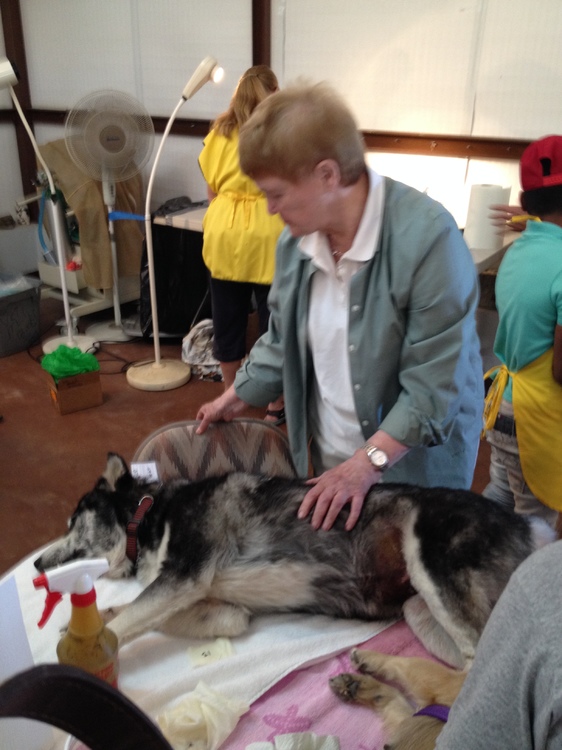 Marcelyn looking after Anouk at the post-surgery clean up station, and also where some shots are administered. 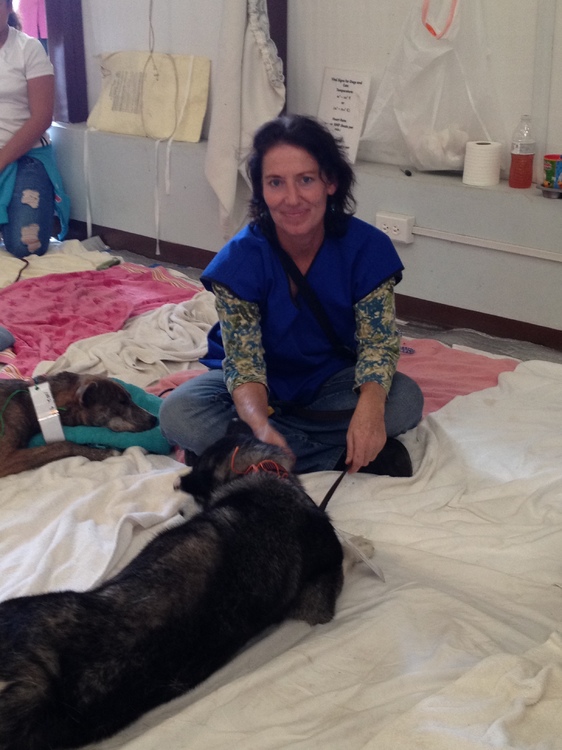