Tuesday September 13 – This is the guy who might save your life !! Angel Rodriguez will speak on the science of volcanology and the early alert system he monitors on Volcan Baru. Angel was born in Panama but graduated from the University of Washington where he married his wife Carla Black. Angel has been a tinkerer and inventor all his life. In his previous life he made bicycles and computers. Spending winters in Volcan,  Panama, Angel started building telescopes. He then turned his attention to making seismometers. He constructed the mechanical parts, designed and built the electronics and wrote the software to create his first seismographs.  Eventually he built his own private seismic network.  Presently he has a nice electronics lab, several 3D printers, a laser cutter, CNC mills, lathes and all the tools a maker might want. He has a passion for making seismographs, including affordable personal seismographs for your home. His Kickstarter campaign has 597 backers and has raised $99,258.00. Raspberry Shake your personal seismograph. 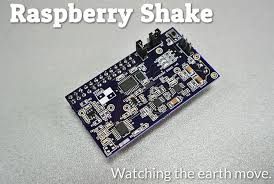