Moderator comment: From a page 8 article in the July 2019 issue of Panama Good Times (Edition #52): 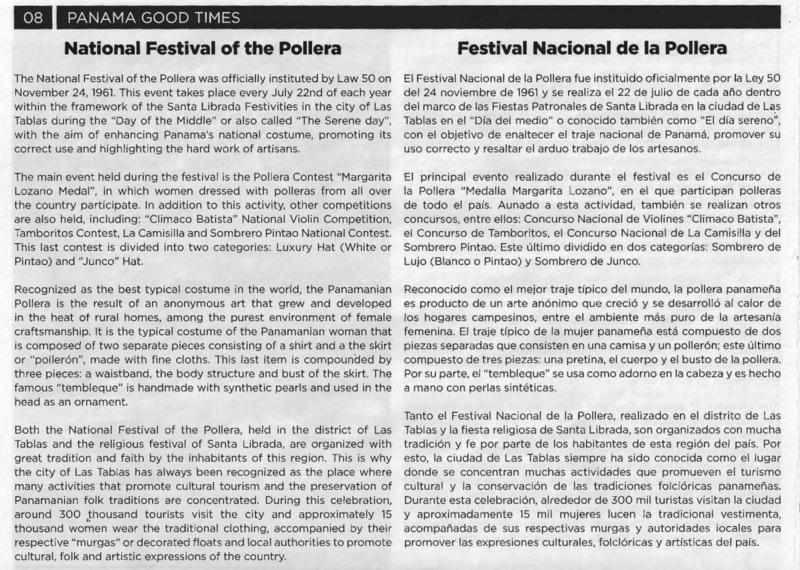 Transcription of the English language version of this article:

National Festival of the Pollera


The National Festival of the Pollera was officially instituted by Law 50 on November 24, 1961. This event takes place every July 22nd of each year within the framework of the Santa Librada Festivities in the city of Las Tablas during the "Day of the Middle" or also called "The Serene day", with the aim of enhancing Panama's national costume, promoting its correct use and highlighting the hard work of artisans.

The main event held during the festival is the Pollera Contest "Margarita Lozano Medal", in which women dressed with polleras from all over the country participate. In addition to this activity, other competitions are also held, including: "Climaco Batista" National Violin Competition, Tamboritos Contest, La Camisilla and Sombrero Pintao National Contest. This last contest is divided into two categories: Luxury Hat (White or Pintao) and "Junco" Hat.

Recognized as the best typical costume in the world, the Panamanian Pollera is the result of an anonymous art that grew and developed in the heat of rural homes, among the purest environment of female craftsmanship. It is the typical costume of the Panamanian woman that is composed of two separate pieces consisting of a shirt and a the skirt or "poller6n", made with fine cloths. This last item is compounded by three pieces: a waistband, the body structure and bust of the skirt. The famous "tembleque" is handmade with synthetic pearls and used in the head as an ornament.


Both the National Festival of the Pollera, held in the district of Las Tablas and the religious festival of Santa Librada, are organized with great tradition and faith by the inhabitants of this region. This is why the city of Las Tablas has always been recognized as the place where many activities that promote cultural tourism and the preservation of Panamanian folk traditions are  concentrated. During this celebration, around 300 ,thousand tourists visit the city and approximately 15 thousand women wear the traditional clothing, accompanied by their respective "murgas" or decorated floats and local authorities to promote cultural, folk and artistic expressions of the country.