Musicalion, a free musical feast for all tastes 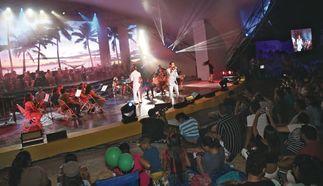 Posted 18/02/2019
The seventh edition of Musicalion with music for all tastes will take place from February 20 to 24 at the Omar Park amphitheater and the entrance is free for all its activities says Madelaine Leignadier vice president of the Aria Foundation and general producer of Musicalion.

The organizers of the musical feast created the Aria Foundation seven years ago, to "promote the performing arts: opera, ballet, theater, and classical music.

Wednesday, February 20, at 7:00 p.m., A concert dedicated to extraordinary movie soundtracks such as Star Wars, Harry Potter, Lord of the Rings, Les Miserables, The Greatest Showman, Beauty, and The Beast and The Lion King, among others.

The recital will be presented by 100 young artists from the Herberto López Institute Band and the Pan American Institute's Music Band, among others.

Sunday, February 24, at 7:00 p.m., a symphonic rock concert will pay tribute to the British band Queen, under the direction of Juan Octavio Díaz and Dino Nugent.