The BCP Hex Room big screen TV is back, and so far is working well, so our Sunday Movies are back on track!  In addition to dis-mounting the TV and taking it to David for warranty service, BCP's wonderful group of volunteers also re-positioned the speakers, so the sound should be better as well.  A big thanks to all involved!

There is no admission charge, but we ask for voluntary donations to support the program and help pay for the video system.

Food, drinks and popcorn will be available from Fenix Cafe.  Early birds get the comfy sofas, but if you like, you can bring cushions for the hard restaurant chairs, or folding/camp chairs for more comfort.

Below is a list of our films for May.  We will send out details each film the week before the screening.

Description:  "Robyn Davidson traveled 1,700 miles across the Australian outback from Alice Springs to the Indian Ocean in 1977 with four camels and a dog.  The story of her incredible journey is the told in the 2013 Australian movie "Tracks,"  and Mia Wasikowska stars as Robyn Davidson.

RogerEbert.com:  “Tracks” isn’t interested in falsely flattering its audience, but it is interested in ravishing it.   the nature imagery presented in widescreen by the director and cinematographer Mandy Walker is breathtaking, striking and poetic. 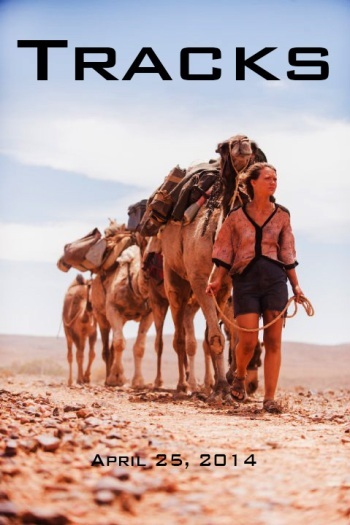