Movie starts at 1pm every Sunday.  Food, drinks and popcorn are available from the kitchen of Cafe La Villa.

Early birds get the comfy sofas, but if you like, you can bring cushions for the hard restaurant chairs, or folding/camp chairs for more comfort.

There is no admission charge, but we ask for voluntary donations to pay for the audio/video system and licensing.

Here is a list of our February films.  Details are sent out details each each week before the screening.   (We will also note ratings and let you know which films contain graphic violence, which some people prefer to avoid.

Description:  "The Color of Paradise" is a an Iranian film that I saw many years ago.  The story is timeless, and the film shows us an Iran that I never knew existed - beautiful fertile valleys in gorgeous mountains.   As usual for my tastes, the Roger Ebert website has the best review. LINK

"The Color of Paradise" is about a blind boy. Quick and gentle, in love with knowledge, acutely attuned to the world around him, Mohammad loves his lessons at a school for the blind. He is loved at home by his grandmother and his two sisters. But his father, Hashem, does not love him. Hashem is a widower, ambitious to marry into a prosperous family, and he fears the possession of a blind son will devalue him in the marriage market."

"As the film opens, the school term is over, and the other boys have been picked up by their parents. Mohammad waits along outside his school, for a father who does not come. There is a remarkable sequence in which he hears the peep of a chick which has fallen from its nest. The boy finds the chick, gently takes it in his hand and then climbs a tree, listening for the cries of the lost one's nest-mates. He replaces the bird in its nest. God, who knows when a sparrow falls, has had help this time from a little blind boy." 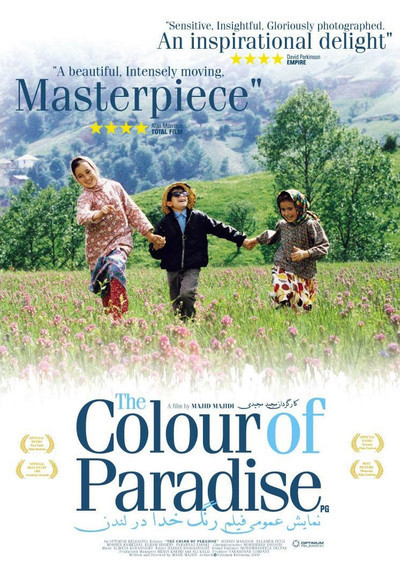