Fancy Dress Is Optional for This Cheese-Lover's Festival 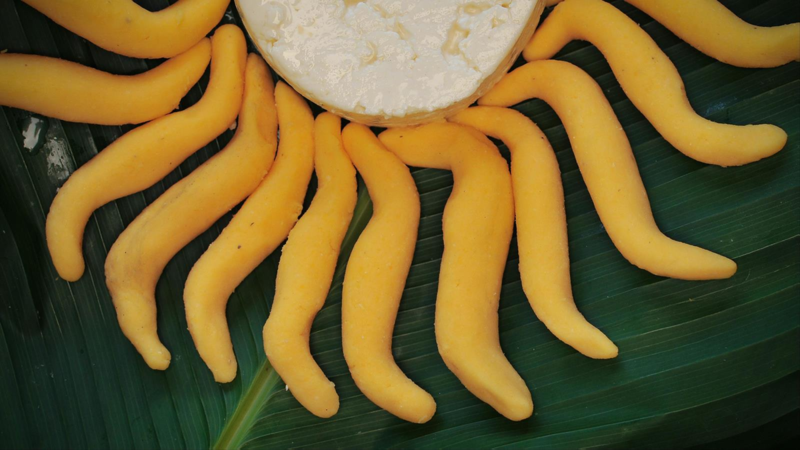 Why you should care

Because these tasty S-shaped fritters are a ray of Panama sunshine.

For most of the year, Dolega is a stopover for tourists heading to nearby Boquete or David. But for five days each January or February, the smell of frying dough overwhelms the fresh country air. Thousands head to this small town in Panama’s Chiriquí province for the Festival Folklórico Internacional del Almojábano con Queso to venerate regional, national and international dance, music and of course, the fried favorite, the almojábanos con queso.

The fritters — often called almojábanos or almojábanas — are found in many parts of Latin America, but it’s the Panamanian version that brings an estimated 5,000 daily visitors. (For some, the 310-mile drive from Panama City is worth it.)

Said to have originated in Chiriquí when peasants fused Spanish and indigenous ingredients, this variety differs in ingredients and shape. Cooks knead corn flour, add chunks of white cheese and a dash of salt and then roll the dough into a thick stick. Then they pinch the ends in opposite directions creating an S shape that mimics the outline of the map of Panama. Next, the dough is tossed into frying oil and kept still for a few minutes. As soon as they are firm on the outside, the almojábanos are ready to serve.

Almojábanos are a staple in any traditional Panamanian breakfast, but during the festival, they’re consumed all day long. And the producers claim these are some of the best you’ll ever try. “The almojábanos at our festival are the most delicious in the whole country,” boasts Merardo Gante, a festival employee. Keithy Bernúdez, a former festival volunteer, says she eats almojábanos nearly every day of the year. She can’t put her finger on why they’re so mouthwatering — it might be the combination of the corn and cheese, or better yet “the love they [the cooks] put into making them,” she hypothesizes.

Bernúdez isn’t alone in her love. To get a sense of just how many almojábanos con queso are sold at the festival, Seferino Miranda, almojábanos producer and owner of Productos Aineth, says that his business usually sells around 4,800 of the fritters daily. During the five days of the festival, he sells around 40,000, almost double an average five-day period. And he’s not the only supplier.

The savory almojábanos are eaten hot: deliciously gooey on the inside with just enough crunch on the outside. Your obsession with the Panama-shaped savory snack will only grow when paired with tasajo (smoked beef) or eaten alongside sancocho, a traditional stew found in many Latin American countries.

The queen of the festival travels in an ox-driven cart.

After filling your belly, you can then focus on the dancing and music competitions featuring performers from across Panama and Latin America, and even from as far as Romania. There are a fireworks show and a final parade, and every year a queen is crowned (unclear if her prize is a lifetime supply of almojábanos con queso).

Folklore artist and festival founder José Armando Corella Rovira wants attendees to value culture. “For me, the most important part is to give my province and my country a firm cultural legacy and keep young people in positive things — and loving their folklore,” says Corella Rovira. But you can’t celebrate the culture of Chiriquí without its most famous bright yellow “S.”

“The almojábanos are really important for the festival because it’s a typical vianda [food] exclusive to our province, and in honor of all the people who get up every day to prepare these almojábanos so they’re at the stores and supermarkets across the country,” explains Corella Rovira.

It isn’t just about enjoying yourself and satisfying your need for ooey-gooey goodness; eating almojábanos con queso means preserving and honoring culture

Location: The festival is held in Dolega, Chiriquí, Panama, in the “Recinto del Almojábano,” the basketball court behind the Dolega Health Center. From Panama City, you can bus to nearby David and take a local bus to Dolega, or by car head west on Highway 1 until David, then toward Dolega on Highway 41.