We don't charge admission, but we do ask for donations to support BCP and the Film Club program.  $2-3 per person is suggested, but any level of donation is much appreciated.

Food and drink - including popcorn - are available for purchase in "The Clubhouse" cafe in the BCP Hex Room .  These items may be taken into the theater, but please clean up after yourselves so we don't have to hire a janitor.
Note:  If you want to receive weekly detailed notices for our films, join our email list by sending a request to BoqueteFilmClub@gmail.com

It's always exciting when a talented screenwriter proves he has what it takes to be a full-on filmmaker. Such is the case with Taylor Sheridan, whose scripts for Sicario and Hell or High Water are models of what livewire, literate thrillers should be. Wind River is no exception. Set on a Native American reservation in Wyoming, Sheridan's directorial debut begins with the disturbing sight of a young girl, afraid for her life and running barefoot in the snow. She's later identified as Natalie (Kelsey Asbille), an 18-year-old whose body is found frozen in the snow.

The finder is Cory Lambert (Jeremy Renner), a wildlife officer charged with hunting down animal predators, such as wolves and mountain lions. Instead, he finds the victim of a rape and murder. An F.B.I. agent named Jane Banner (Elizabeth Olsen, doing hard-ass to a T) is called in from Las Vegas to investigate. The two lock horns immediately. He knows this land and understands the people who live there in poverty and racial strife; she does not. The conflict is established and the hunt for the killer is on, eventually leading back to oil-company land policed by private security teams. 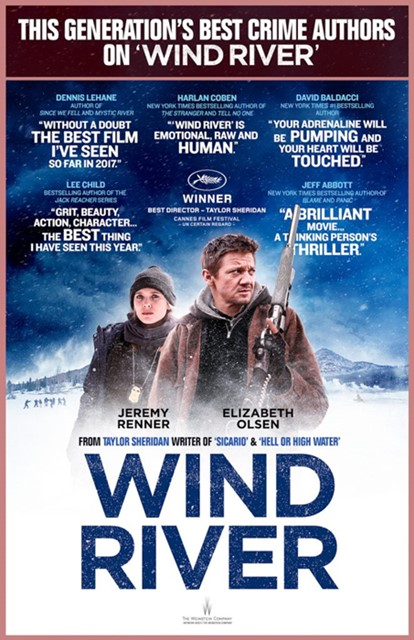